15 Reasons You Need Saffron In Your Life

admin
on June 17, 2015 at 6:04 am
Spices
Main Name: Saffron
Biological Name: Crocus sativus
Names in other languages: Azafrán (Spanish), Acafrao (Portugese), Safran (French), Kesar (Hindi), Kungumapoo (Tamil), Kunkumapoove, Kashmiram (Malayalam), Kumkuma puvvu (Telugu), Keshar (Gujarati), Jafran (Bengali), Keshar, Kesara (Marathi), Kesara, Kunkuma phul (Oriya), Zafran, Kisar (Urdu), Keshar (Punjabi)
Ever wondered that even the dried red threads or ‘stigmas’ of a flowering plant could be so exotic that one needs to think twice, or probably quite a few times, before buying just a gram of it? That’s the kind of standing the pricey saffron enjoys in the world of spices. And you shouldn’t be surprised if we share another small yet interesting piece of info. For, a single ounce of saffron is derived from over 4300 spectacularly beautiful royal purple flowers of the crocus plant. It is due to its special cultivating process that saffron is termed as the most precious spice in the world and has been nicknamed as the ‘golden spice’. With just three thread-like stigmas present in each flower, you would have to splurge out a hundred greens to buy less than an ounce of good and superior quality saffron. The spice is derived from the saffron flower which is a bulbous perennial plant belonging to the Iridaceae family and is botanically known as Crocus sativus. What is more amazing is that you just have to sprinkle a tiny pinch of this spice in your recipe due to its intense flavoring and coloring power. Reddish golden in color, saffron finds its most important use as a seasoning agent in cooking and as a coloring agent. Not just that saffron is one of nature’s highly powerful herbs, it has some secret and magnificent essential nutrients loaded which are highly useful for treating a number of common ailments and diseases. Read on to know the health benefits of saffron when taken in moderate amounts and in the right dosage.
History
Although the exact origin of saffron is still uncertain, it is believed to have come from Greece or Asia Minor, a part of Turkey, where it is still cultivated on a large scale. In fact, the world saffron also comes from the Arabic word ‘zafaran’ which means ‘yellow’. The spice appeared in ancient Babylon and China as early as 2600 BC where it was honored for healing and coloring purposes. Biblical traditions indicate that saffron was one of the most fragrant plants grown in King Solomon’s gardens. Another historic reference of saffron draws back to ancient Egypt where it was used by Cleopatra and other Pharaohs for both sacred and sensual purposes. The saffron plant was apparently introduced by the Iranians to the Greek, Roman, Chinese and Sami ethnics, including Arabs. Around 500 BC, the Persian rulers transplanted saffron in Kashmiri soils, after conquering Kashmir. However, an ancient Chinese historical explains that an Arhant Indian Buddhist missionary named Madhyantika sowed the first saffron crop when he was sent to Kashmir in the 5th century. Whatever is the origin behind the introduction of saffron to Kashmir, it has since then spread through the Indian subcontinent. While the best saffron comes from Spain, the Kashmir region of India, Iran, and Greece; Spain is the world’s largest exporter of saffron. 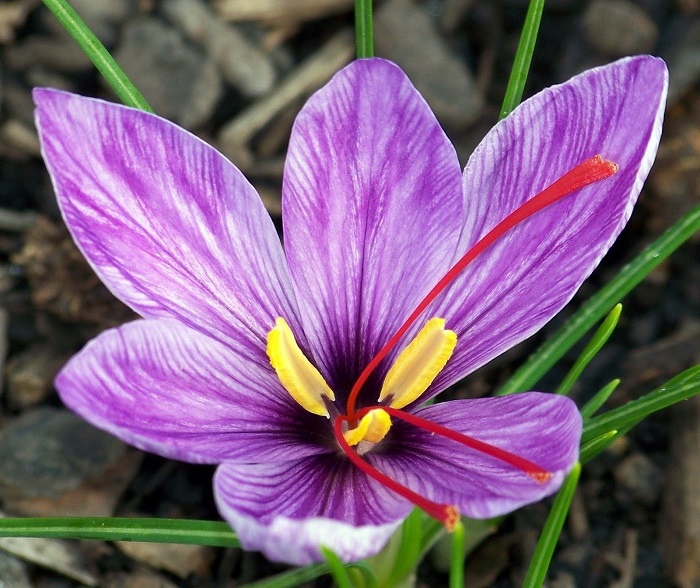 How many calories in saffron (per 100 gm)
Saffron has about 310 calories per 100 gm of weight.
How to Buy Saffron
Saffron Storage Tips