Amazing Benefits of Pearl Millet You Never Knew About

admin
on June 17, 2015 at 5:47 am
Nuts & Seeds
Main Name: Pearl Millet
Biological Name: Pennisetum glaucum
Names in Other Languages: Grano (Spanish), Type de graine (French),  Bajra (Hindi), Kamboo (Tamil & Malayalam), Sajjalu (Telugu), Bajri (Marathi, Gujarati), Bajra (Bengali, Oriya, Punjabi & Urdu)
There’s great news for all you gluten intolerant people! If you are looking for alternatives, then don’t forget to incorporate the pearl millet in regular diet. The most widely grown millet, the pearl millet, is known for its culinary uses as well as health benefits. It is cultivated in countries of Africa and the Indian subcontinent since prehistoric times. Pearl millets, earlier known as ‘bird food’, come in several delicious flavours. What is unique about this cereal is that it may be as creamy as mashed potatoes or as fluffy as rice. In India, pearl millets are regarded as one of the major sources of dietary energy and nutritional security for poor farmers and consumers. Apart from offering excellent taste, these millets contain essential mineral and nutrients, which provide the body with a variety of advantages.
History
Since prehistoric times, pearl millet has been grown prominently in Africa and Indian Subcontinent. It is believed that pearl millet originated in Africa and was later introduced to India. The earliest archaeological evidences show that millet was cultivated in India around 2000 BC; hence, domestication in Africa must have taken place before that. Its origin can be trailed back to North Africa, specifically in Ethiopia but the center of diversity for the crop was in the Sahel zone of West Africa. From there, its cultivation subsequently spread to east and southern Africa, and southern Asia. Millet is an important food staple in Africa where it is used to make a traditional flatbread known as injera. The ground millet seeds are used for making the Indian flatbread, called roti. In the Middle Ages, millet was a staple grain in Europe, especially in countries in Eastern Europe. It was introduced in the United States in the 19th century. Millet is popular as birdseed and livestock fodder in Western Europe and North America, but it has recently gained popularity as a delicious and nutritious grain due to its nutritious benefits and gluten-free status. Currently, India is the leading commercial producer of pearl millet, followed by China and Nigeria. 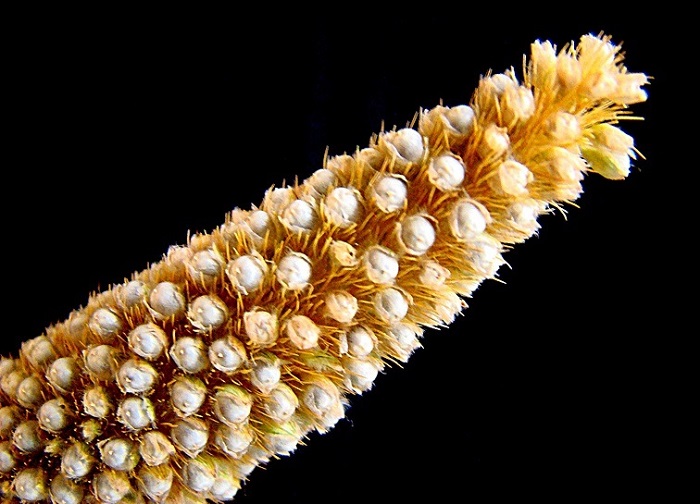