The Very Sight Of These Japanese Street Food Will Make Your Stomach Tingle!! Delicious!

US author David Mitchell says it all in a nutshell when he declares, “Japanese food makes me feel particularly good.” Japanese cuisine is one of the most popular in the whole world and FYI food from Japan is a lot more than just sushi and using chopsticks to eat. Japanese cuisine is a well-balanced blend of fine dining and the all-time favorite street food. If you’re in Japan, sampling the food of the region turns out to be a truly rewarding culinary journey. What makes it even more astounding is the fact that the Japanese have built their specialties based on the four seasons, and each seasonal item has its own distinct flavor. Their use of typically Oriental ingredients imparts uniqueness to each culinary masterpiece they create. Be it the Miso soup, or the staple Gohan, or Tempura prawns or even their range of pickles known as Tsukemono, each dish proves to be a gastronomical as well as visual delight. Read the article to know more about the street food of Japan.

1. Okonomiyaki
Okonomiyaki is a Japanese pan cake on which selected toppings can be added as one may wish. Japanese Okonomi means “as you like it ” or “what you want” and yaki means “grilled”. This dish is popular in the western part of Japan and is widely available on the streets of Hiroshima and Osaka. This dish is also referred to as “Japanese Pizza” and has been around in Japan long before Mc Donald’s opened its first outlet. In Japan the “Teppan” (iron griddle) technique is quite popular and in some restaurants you can customize Okonimiyaki suiting to your needs. 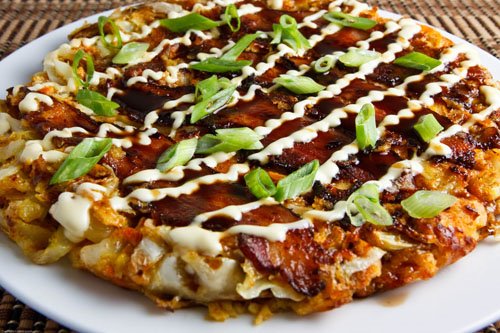 2. Yaki Imo
Yaki Imo is a purple Okinawan sweet potato or Japanese yam as some call it, is just too pretty. These are baked over charcoal and are sold on wooden carts called “yaki-imo-ya” at fairs. These days you will find them sold in Vans and Trucks that have loudspeakers on them, with recordings that call out very loudly “yaaaaakii — imoooo” while moving slowly along the street. So these are not very hard to spot on the Japanese streets. 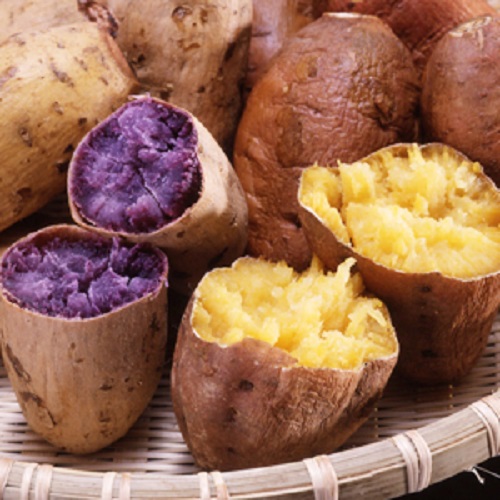 3. Japanese Crepes
What’s so special about Japanese crepes? This in-expensive “On The Go” kind of fast food come with about 60 to 70 different possible fillings, which is concocted on the spot and served in a cone that is similar to that of an ice cream cone. Many crepes are filled with typical Japanese ingredients, such as Azuki beans and whipped cream; or chicken with teriyaki sauce, but they taste basically like a French crepe with a few minor differences here and there. The other difference is that there’s less butter used and the fillings are not over cooked. 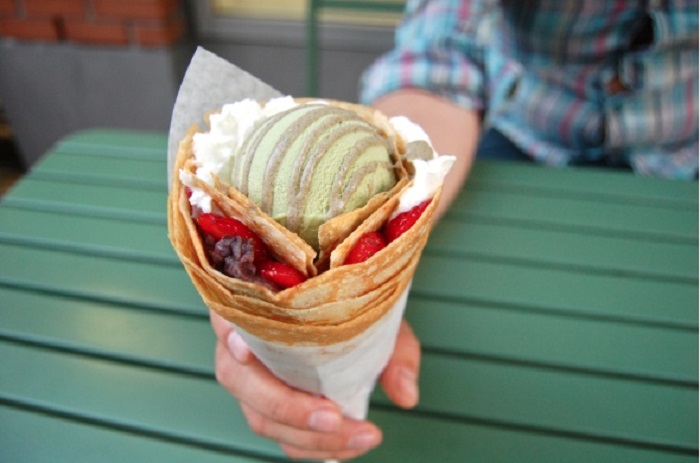 4. Nikuman : Japanese Pork Buns
Nikuman( Niku which means meat in Japanese) is a savory Japanese dish made from flour dough and filled with cooked ground pork or other ingredients. They are steamed and often sold as street food mainly from August through the winter months until April. It is not an expensive snack and three pieces would cost you about 100 yen. 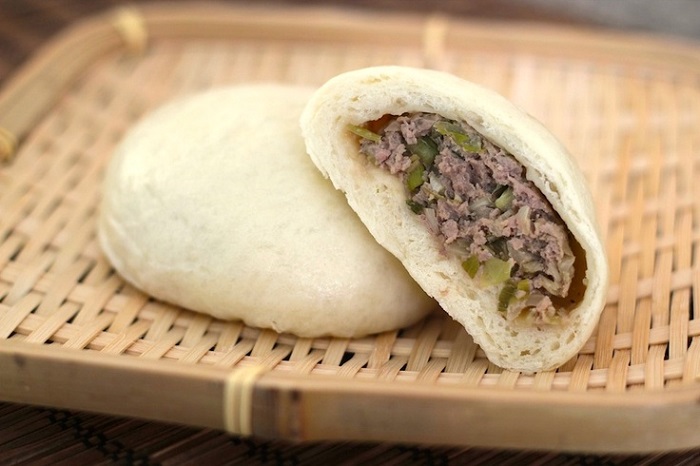 5. Ikayaki
Ikayaki is grilled squid and is a popular tentacle fast food in Japan. It is easy to cook, and a delicious side dish which goes well as a starter with a chilled glass of Sake (Japanese rice wine). A piece of squid is simply grilled and topped with soy sauce. Ikayaki is either served as portions or whole body without entrails. In Osaka is it served in pancake style and is prepared like folded crêpes served with Worcestershire sauce and on occasions with egg. 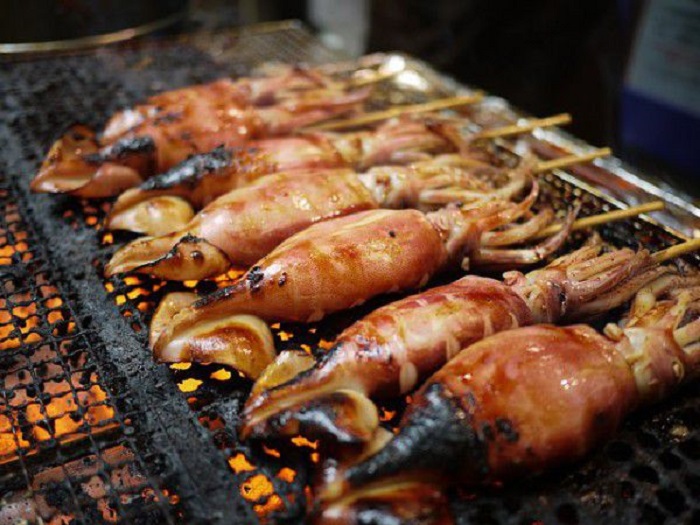 6. Onsen Tamago
Onsen tamago means “hot spring egg.” In the Onsen towns in Japan, onsen tamago is a popular delicacy and sold in convenience stores and on the streets. These slow cooked eggs take on a unique texture similar to being poached when cooked for long. The slow cooking process gives the egg a texture like custard and is typically served in dashi and soy sauce. 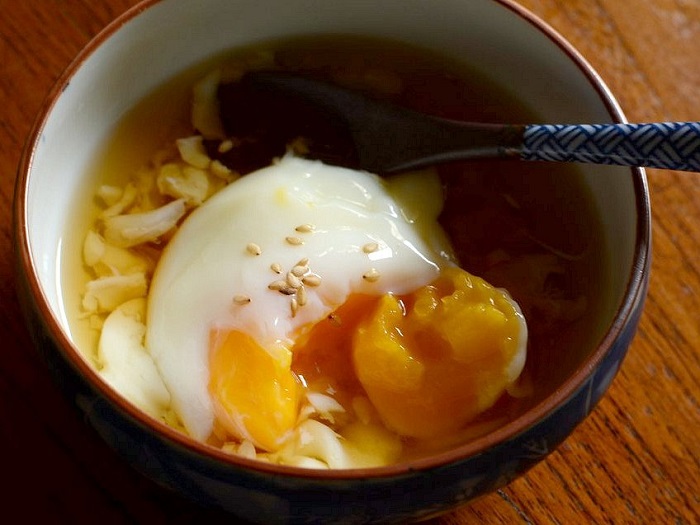 7. Jaga Bata ( Butter- Potato)
Another typical Japanese summer festivals meal, the skin is peeled off in some cases and it is covered in butter that gives it that fine delectable quotient. They usually cost 500-Yen or less and in Japan and is consumed by the locals with the help of chopsticks. 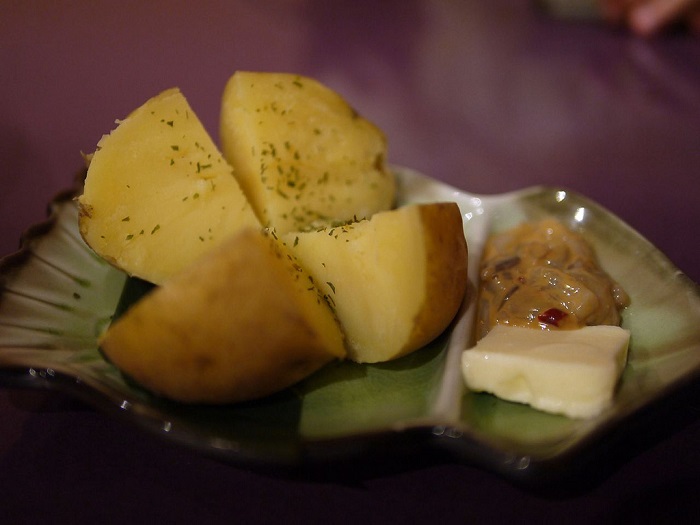 8. Yaki Tomorokoshi – Japanese Grilled Corn on the Cob
Corn (tomorokoshi in Japanese) often shows up on pizzas, breads, and pastas in Japan. However when corn is in season, cobs on a stick can also be seen getting grilled up by street vendors. It is first boiled is dipped in miso, butter, and soy sauce, and is usually served on a stick, so you can eat as you walk! Yaki Tomorokoshi is typically associated with the Hokkaido region in Japan but you’ll see it served all over the country. 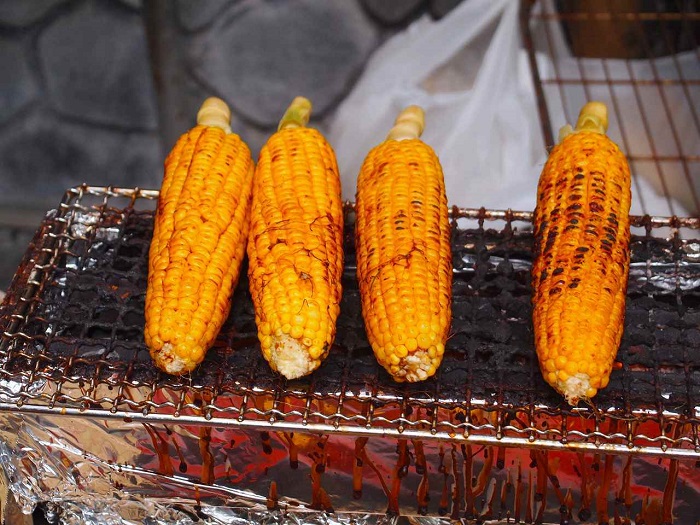 9. Japanese Curry Rice
Japanese curry rice is one of the most popular dishes in Japan and is a kid of one pot meal with meat ( Chicken or Beef)and a variety of vegetables which is decided by the preference of the chef. It is mostly eaten along with rice but can be had with Udon noodles and curry bread also. 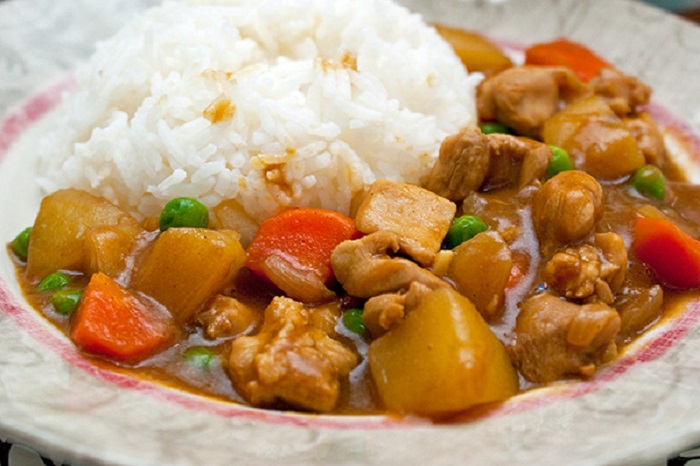 10. Choco Banana
You will find this snack not just all over Japan but also all over Instagram. These are basically bananas covered in chocolate and decorated with a variety of sprinkles. These are popular festival foods, and they cost approximately around 200-Yen. The calorie count is a little high but since there is banana you can reduce your guilt and enjoy this snack when you visit Japan. 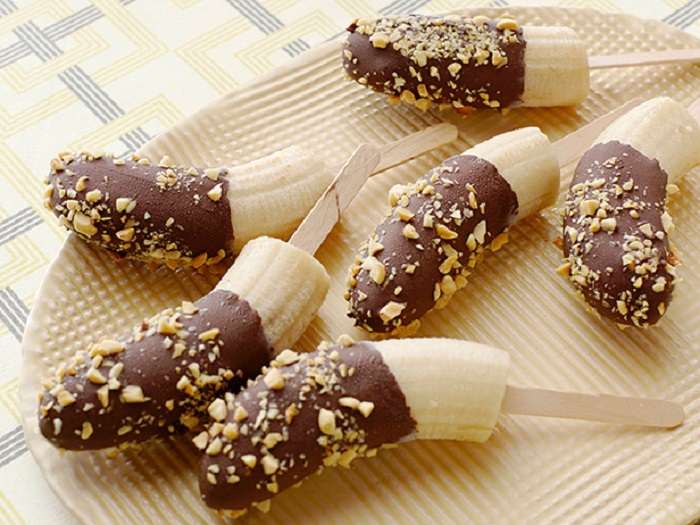 11. Taiyaki- Japanese Fish Shaped Pan Cake
Taiyaki is a popular Japanese sweet desert that generally is a sea bream shaped waffle made from pancake or waffle batter. It is filled with red bean paste or various other sweet fillings. The “Tai” part of the name comes from the Japanese name of sea bream. Sea bream is a symbol of good fortune and this is the significance behind this treat shaped like a fish. Its fillings range from sweet flavors like chocolate, custard or apple to more salty and spicy fillings like German potato, Italian, and bacon. 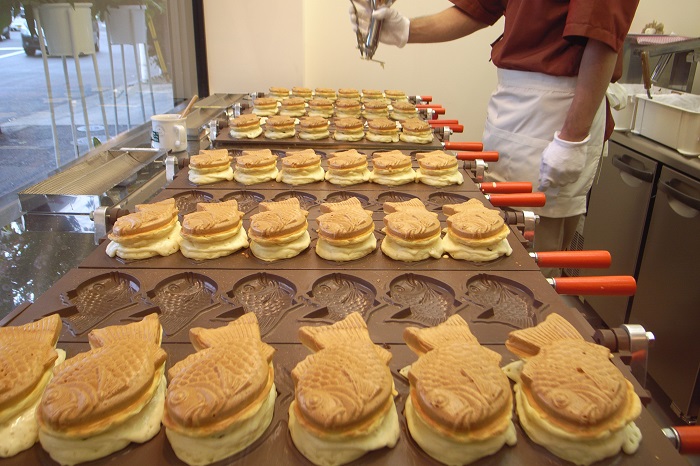 12. Yakisoba
Yakisoba is another classic Japanese street food made by stir-frying boiled noodles with vegetables, meat or seafood and mixed with sweet and spicy sauces. It is very similar to Chinese chowmein. During the summer months, many Japanese make yakisoba on a BBQ grill. 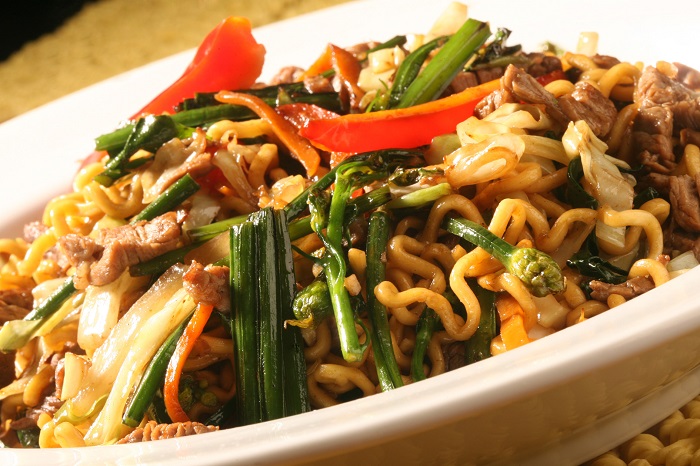 13. Kasutera (Castella)
Kasutera is a popular Japanese sponge cake which consists of flour, sugar or honey, eggs and starch syrup. It is very common at festivals and as a street food. It is a variant of Western sponge cake, except that honey is added to sweeten the cake. This cake variety was brought by way of Portuguese merchants in the 16th century and is now a specialty of Nagasaki. In each area of Japan, restaurants tend to prepare fresh, sweet castella dishes with their own varieties of locally grown fruit. The baby version of this is called as “Bebi Kasutera” and these are the bite sized version of this popular cake. 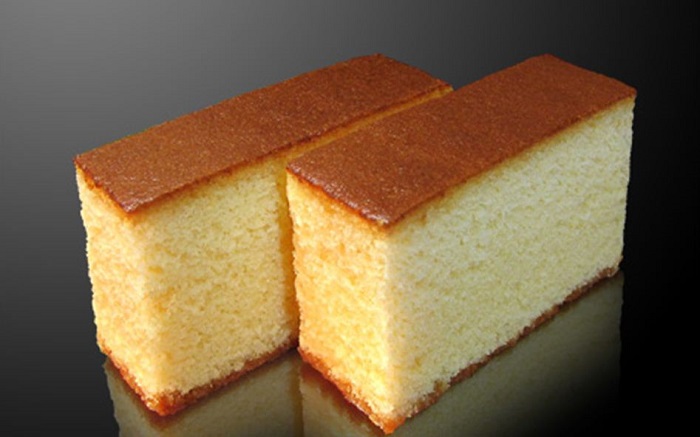 14. Oden
This is a winter dish made as a light broth stew using meats, fish and vegetable items.
Ingredients vary according to region and between each household. Oden was originally made using tofu and eaten with miso but in time people started cooking Oden with many different things. With a single-ingredient a plate of Oden could cost you around 100-yen. 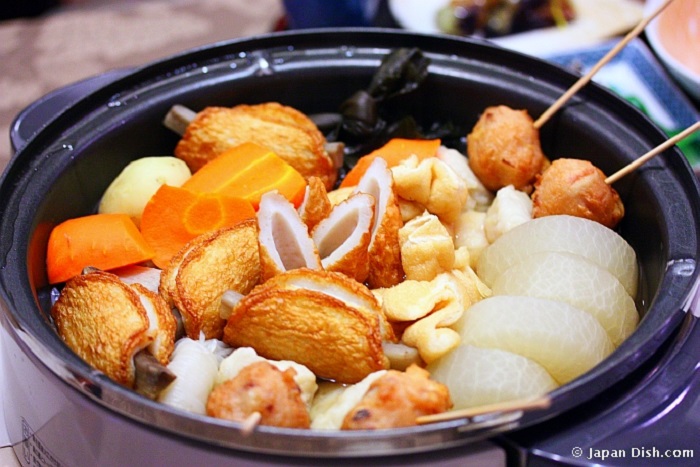 15. Takoyaki
Takoyaki is basically small spherical balls of fried octopus. Normally minced or diced octopus is stuffed inside wheat flour batter and then cooked in a cast iron mould that is specially created to cook Takoyaki. Along with minced octopus for additional flavoring sometimes they also put tenkatsu, ginger and onion. Takoyaki is served in batches and then covered with different toppings – maybe fish slakes, sauce, chives, spring onions, or mayonnaise. Be careful while eating them, they can be pretty hot when served straight off the mold. 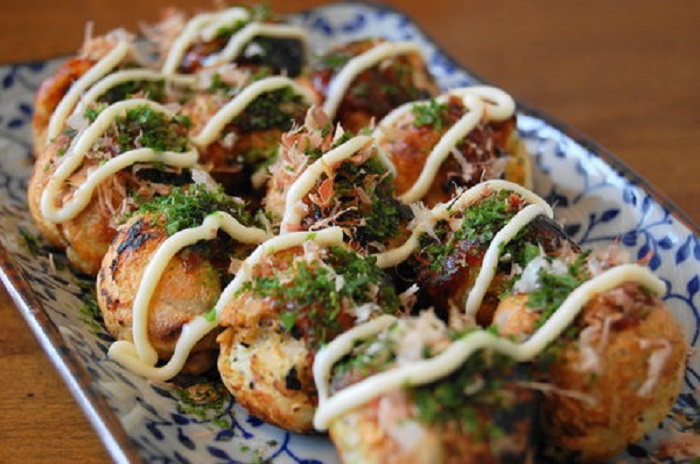 16. Senbei
Senbei are Japanese rice crackers and they come in both sweet and savory flavors. It is more of refreshment than main food and is normally served with green tea. They are usually brushed with soy sauce while being cooked and are usually baked or grilled over charcoal. There are also some tiny variations of Senbei called arare and they come in shapes of seeds, leaves animals or cherry blossoms. You will find some very interesting flavors like kimchi, wasabi, curry and chocolate. 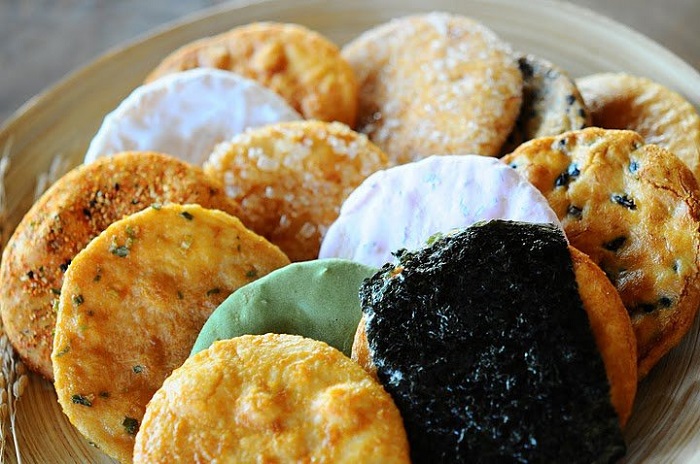 17. Dango
Dango is a classic Japanese dessert in the form of dumplings and has a chewy texture. Normally about three to four Dangos are often served on a skewer. There are different types of Dango named after by the various seasoning served on or with it. Mitarashi is covered with syrup made from shouyu (soy sauce), sugar and starch. Anko comes with sweetened red bean paste. Chadango is a green-tea flavored Dango Kinako has toasted soy flour. 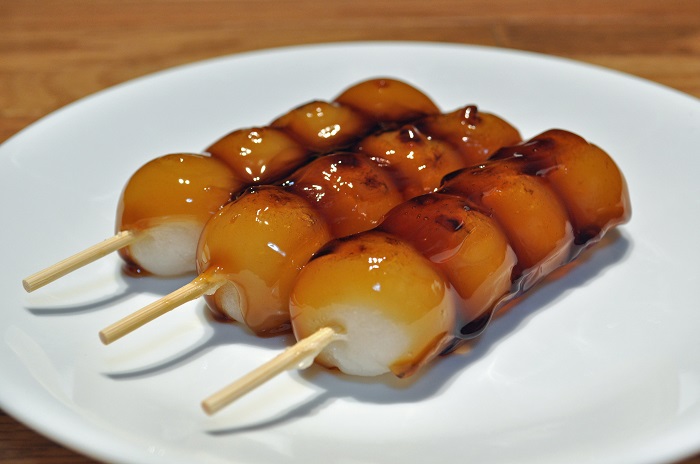 18. Kakigori
Kakigori is shaved ice dessert that’s very popular at beaches, festivals, events and cafes in the Japanese summers. It has a huge nostalgic value and that is why it is common for many families in Japan to have a hand-cranked or electric ice shaver in order to prepare homemade Kakigori. Kakigori is sweetened with brightly colored sugar syrups and condensed milk. 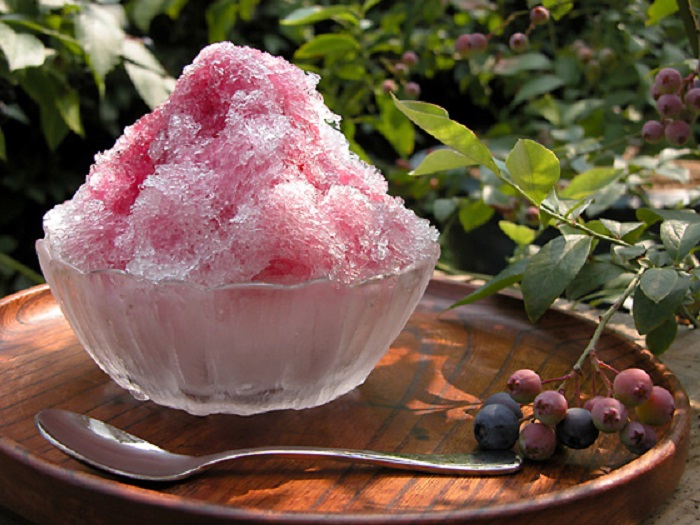 19. Tempura
Tempura is deep fried fish and vegetables in a light batter made from beaten egg, flour and cold water. This dish is quite synonymous with ‘Japanese food’ in the minds of many. They are best when served hot with soy sauce or Tentsuyu dip. 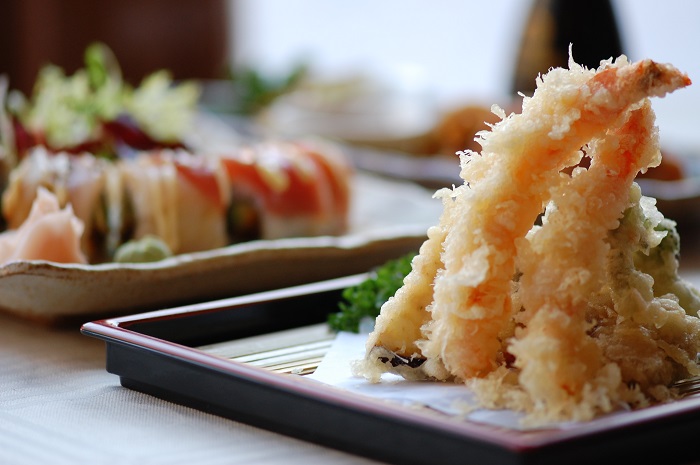