admin
on June 17, 2015 at 5:40 am
Herbs & Spices
Main Name: Parsley
Biological Name: Petroselinum crispum
Names in other Languages: perejil (Spanish),  Persil (French), Ajmoda (Hindi), Kothamalu Ilaigal Pole (Tamil), Malleila Pole (Malayalam), Kothimeera Jati Koora (Telugu), Ajmoda (Gujarati, Marathi), Parsley (Bengali), Balabalua Saga (Oriya), Peter sili, Kharf (Urdu)
Parsley, a leaf that is used chiefly as a garnishing herb, is often not credited for its unique health benefits. Many of us believe that parsley is used only as a decorative vegetable by restaurants around the world, completely ignoring the nutritional values that are an integral part of this green leaf. In fact, not only is the nutrition of parsley ignored but also the fact that this leaf has a unique delicious taste is overlooked. There are different varieties of parsley available in different parts of the world and the taste of each variety is different from one another. It is a biennial herbaceous plant, which means that the parsley plant grows naturally, dying after seed maturation and growing yet again once the plant is cultivated on a field. Parsley is not only popular as a food item amongst humans but also amongst insects, like butterflies and bees, who feed on the nectar of parsley flowers to obtain their food. Then, why wait for making an herb like parsley a part of your diet? Check out the glut of nutritious advantages that parsley offers to your heath in the following section. Buy some fresh green leaves of parsley and see the difference it brings to your health within a few days.
History
Parsley has been grown worldwide for more than 2000 years now. However, its uses remained limited as a medicine before it became a popular garnishing food item. The first instance of using parsley as an edible herb can be traced back to the Mediterranean region of Southern Europe. Greece was the first country to make use of the parsley plant. Several years ago, parsley was considered a sacred plant in Europe, when the herb was used for decorating the tombs of the dead and for adorning winners in competitions. It was several years later that parsley became widely known for its medicinal properties and even much later that the green leaf became popular as a food item. It was during the Middle Ages that the Romans first started the practice of using parsley as a seasoning in food. There were two types of parsley leaves grown during that time – the curly leaf which was bitter in taste, and the Italian flat leaf which was known for its fragrance. The Europeans preferred the former to the latter. The Hamburg parsley which is grown for its roots is a recent parsley crop that has gradually gained popularity amongst the world masses in a span of two hundred years. 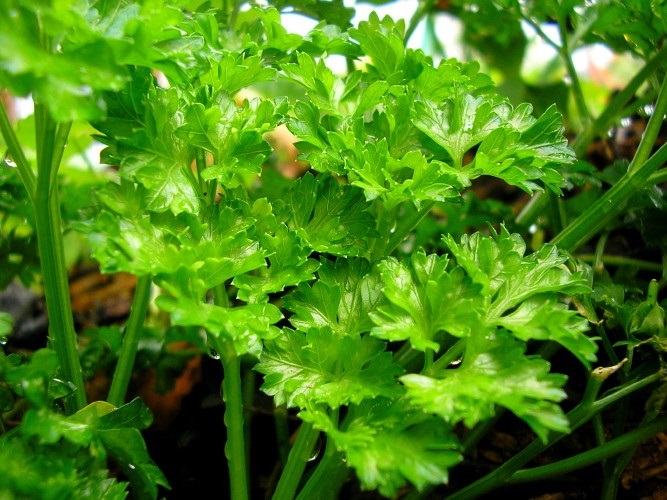 Parsley Nutrition FactsAmount: 1 cup
Total Weight: 61 g
How many calories in parsley (per 100 gm)
Parsley has about 36 calories per 100 gm of weight.
How to Buy Parsley
How to Store Parsley