The Secret Healing Benefits Of Miso

You must have heard about “miso” only in Japanese movies and literature. It would have been mentioned a dozen times particularly because of its great taste and influence in Japanese and Chinese traditional food. In fact, the Japanese begin their day with a warm bowl of miso soup, which is believed to stimulate digestion and energize the body. Miso is a famous seasoning made by fermenting rice, barley, or soybeans, with salt and fungus kojikin. Miso has been a part of the Japanese culture for centuries. The taste, aroma, texture, and appearance of miso vary from region to region and also with season. Miso is used in various forms, the most popular being the miso soup which is a staple food in the Japanese cuisine. It is also used in many other soup-like dishes, such as ramen, udon, nabe, and imoni. Apart from serving great taste, miso offers loads of wonderful health benefits. Due to its increasing health promoting properties, miso is gaining popularity in the West. Give yourself know-how about the plethora of wholesome advantages that miso offers to your body and overall health.
History
The history of miso can be traced back to China. Its predecessor, “hisio” was a seasoning prepared from fermenting soybeans, wheat, alcohol, salt, and other ingredients. It is believed that miso was a luxury food item limited only to wealthy aristocrats. Around the 7th century, this soybean paste was introduced to Japan. Miso was initially made without grinding the soybeans until the Muromachi era. In the Kamakura era, a common meal made from rice, dried fish, miso, and fresh vegetables was quite famous. It was during the Muromachi era when Buddhist monks discovered that soybeans could be ground into a paste, thereby introducing new cooking methods for using miso to flavor other foods. The process of producing miso was relatively simple which led to the spread of homemade versions throughout Japan. During the Sengoku era, miso was used as military provisions and making miso became an important economic activity for daimyos of that era. In the Edo period, miso was also known as hishio and kuki, and various types of miso, based on climate and culture, were formed in Japan. These days, miso is gaining extreme popularity in the United States due to the intense recognition of macrobiotic diet and escalating interest in Asian food culture. 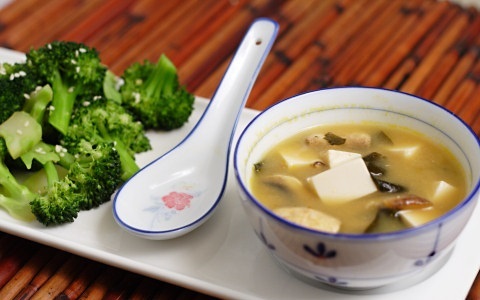 Miso Nutrition FactsAmount: 1 cup
Weight: 275 g
How many calories in miso (per 100 gm)
Miso has about 199 calories per 100 gm of weight.
How to Buy Miso
Miso Storage Tips