admin
on June 17, 2015 at 5:20 am
Herbs & Spices
Main Name: Mace
Biological Name: Myristica fragrans
Names in Other Languages: Maza (Spanish), Macis (French), Palcát (Czech), Javithri (Hindi), Jathipatri (Tamil, Malayalam), Japathri (Telugu), Jaypatri (Gujarati, Marathi), Jayitri (Bengali & Oriya), Javitri (Punjabi & Urdu)
There are several important natural herbs and plants which nature has blessed on mankind. Mace or nutmeg is one of the natural boons. While nutmeg is the actual seed of the tree, mace is the dried reddish covering of the seed. Known for its several culinary and medicinal uses, mace is a prominent flavoring agent in cuisines of most countries. Mace can be used in several forms, either as the dried lacy covering or in powdered form. Its versatile flavor makes it an important ingredient in various dishes to enhance the taste and bring out the color of the food. White sauce, lasagna, stews, ragouts, sausages and pastries are just some delicacies that incorporate mace in their recipes. Mace is highly nutritious and extremely rich in protein and fiber. Besides, there are plenty of health benefits that make mace a significant spice to be stored in the kitchen cabinet. Read further, to acknowledge you with the nutrition facts and advantages to health it has to offer.
History
It is believed that mace originated in Banda, the largest of the Molucca Spice Islands in Indonesia. There are accounts of Roman author Pliny mentioning two flavors of mace around first century AD. It is said that Emperor Henry VI smoked the streets of Rome with mace before his coronation. Around the 6th century, Arabs brought mace to Constantinople. Mace or nutmeg became the matter of massacre and enslavement of the inhabitants of the island of Banda, when the Dutch engaged a bloody war to control the production of mace in the East Indies. The control of mace production remained under Dutch until World War II. The famous Frenchman Pierre Poivre brought mace seedlings to Mauritius where they flourished, eventually ending the Dutch monopoly of the spice. Later, the British East India Company transported the nutmeg tree to Penang, Singapore, India, Sri Lanka, West Indies and Grenada. Today, Indonesia and Grenada are the leading producers and exporters of mace, followed by India, Malaysia, and Sri Lanka. 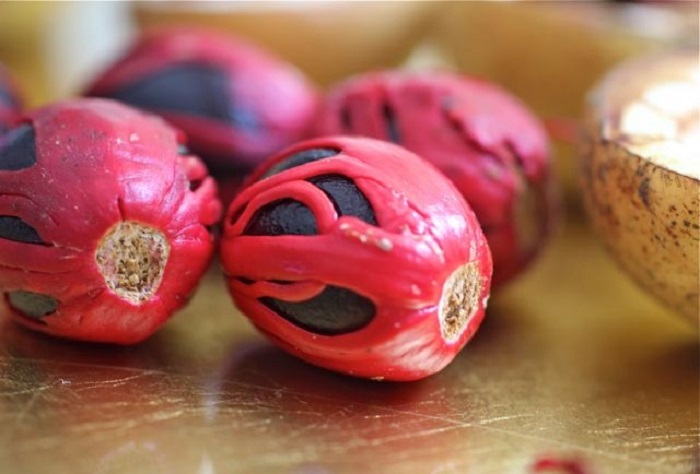 http://boldtgallery.com/places/zambia/peace_corps_pics/zanzibar/spice_tour_nutmeg_and_mace.html
How many calories in mace (per 100 gm)
Mace has about 475 calories per 100 gm its weight.
How to Buy Mace
Mace Storage Tips