admin
on June 17, 2015 at 5:04 am
Fruits
Main Name: Jackfruit
Biological Name: Artocarpus heterorphyllus
Names in other languages: Jaquier ou jacquier (French), Katahal, Kathal (Hindi), Pala pazham (Tamil), Chakka (Malayalam), Panasa (Telugu & Oriya), Phannasa (Gujarati), Kanthal (Bengali), Phanas (Marathi), Kathal (Punjabi & Urdu).
Surely you have heard of the magnanimous jackfruit! The prickly fruit, characterized by a gasoline smell on the outside and a bubble gum aromatic flesh in inside, is the largest tree-borne fruit in the world, with a maximum weight of 36kg. Native to Southwestern India, Bangladesh, Philippines and Sri Lanka, the jackfruit is admired for its incredible taste, texture and edible seeds, similar to chestnuts, found encased in the flesh. Consumed both in the ripe and unripe forms, jackfruit is a part of some of the most exotic and lip-smacking delicacies across the world. Eaten raw, blended into a fruit salad or as a dessert topping, jackfruits do not lose their nutritional content. Botanically known as Artocarpus heterorphyllus, the jackfruit is a member of the Mulberry family. Apart from its pulpy flesh, sweet taste and amazing aroma, only a few people are aware of the wholesome benefits that it offers to the body. With the following list of advantages and tips, we promise to make your jackfruit meal a delicious and nutritious one.
History
The exact origin of jackfruit is unknown, although it is believed to be indigenous to the rainforests of the Western Ghats of India, dating back to 3000 to 6000 years ago. Historians relate the discovery of jackfruits with the Indian Emperor, Ashoka, who encouraged the cultivation of several fruits, jackfruit being one of them. In 1782, certain plants were captured from a French ship and were taken to Jamaica and planted there. About 100 years later, the jackfruit appeared in Florida and was introduced into Brazil in the 19th century. Gradually, the fruit spread to other parts of India, Southeast Asia, East Indies and Philippines. Today, the jackfruit is the national fruit of Bangladesh and Indonesia. In the Americas, it has successfully flourished in Brazil, San Diego and Florida. However, the portions of the United States and Canada experience a cold climate making it unsuitable for the growth of jackfruit trees. India, Bangladesh, Sri Lanka, Philippines, Malaysia, Thailand, and Indonesia are some of the major commercial cultivators of jackfruit. 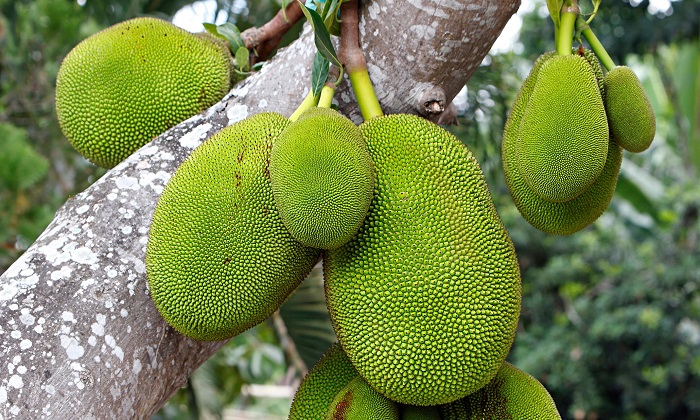 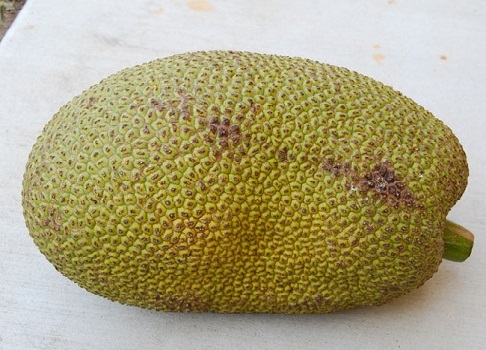 http://www.egyolk.com/mt/lifestyle/2012/04/
How many calories in jackfruit (per 100 gm)
Jackfruit has about 94 calories per 100 gm of weight.
How to Buy Jackfruit
Jackfruit Storage Tips