Apart from its cultural heritage, India is also world renowned for the wide range of mouth-watering delicacies it offers. One of the prime factors which adds flavor to Indian foods and make them seem distinct in comparison with other world cuisines are the spices that are found exclusively in the nation. Although many might dismiss Indian foods on the basis that they are too high on calories and fattening, this country’s cuisine also boasts of a lot of other delicacies tailored to meet the health needs of every individuals. A few dishes have turned out to be innovative ways of making people consume their vegetable or fruit ingredients, which many would refrain from consuming in a raw form. These dishes even help in keeping a tab on health issues such as rise in cholesterol and blood pressure, indigestion as well as ailments such as Cancer and Piles. Here are 15 Indian foods which are definitely worth a try for a health conscious person.

1. Palak
Hardly a few would disagree that spinach, commonly known in India as Palak, is a really nutritious gift of nature. The great abundance of nutrients such as Vitamin K, vitamin A and magnesium help in body building, nourishing the skin and even improving eye sight. Consumption of Spinach leaves prevents ailments like Cataract and helps in making individuals look young and fresh. 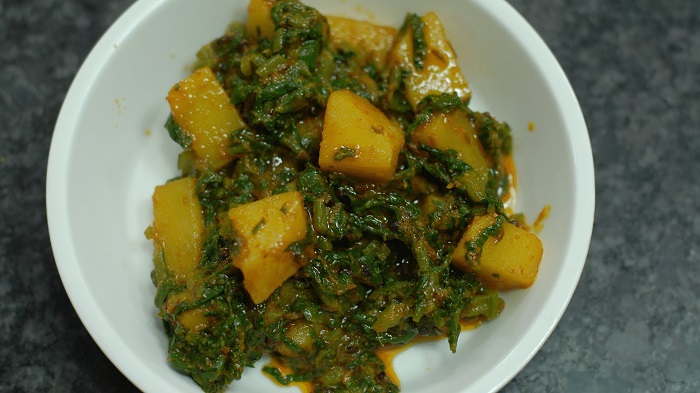 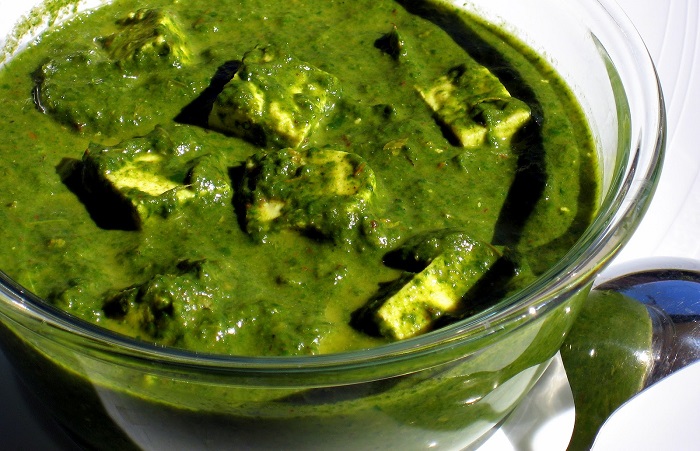 2. Rotis
Wheat is largely consumed across India and is one of the best sources of proteins. Breads made out of wheat flour, such as Rotis or Chapatis are a favorite amongst the Indian masses. This roasted form of flour is also rich in vitamin B1, B2, B3, B6 and B9 and minerals such as magnesium, calcium and Iron. The bread is also easily digestible and fibers present in it, quickly gets absorbed in the digestive tract. In addition, good consumption of rotis also reduces the risk of succumbing to dreaded diseases such as Cancer. 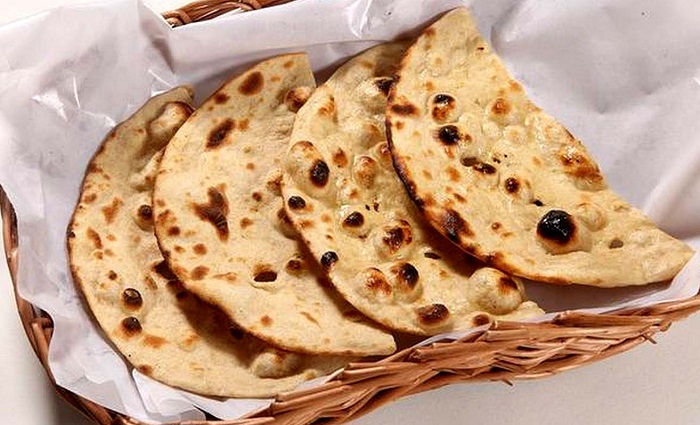 3. Rajma
Curry prepared by using kidney beans, popularly known as Rajma, is a delicacy which is absolutely adored by many, mainly due to its nutritional value. The bean is rich in Vitamin K, which provides adequate nutrition to the Brain and the central nervous system. Rajma also plays a vital role in regularizing bowel movements and maintaining blood sugar levels. 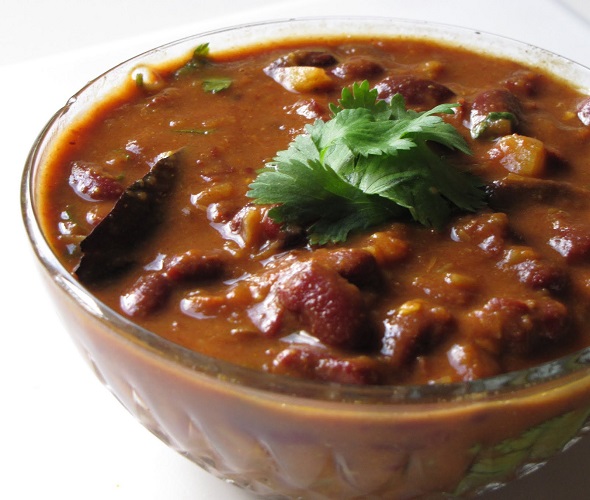 4. Pulses or Dal
Pulses such as green gram, Bengal gram and lentils are essential ingredients of authentic Indian curries. Delicacies made of different kinds of pulses, such as chickpea are not just mouth-watering, but are also good fighters of constipation and other health issues such as high levels of cholesterol. Intake of pulses is also greatly beneficial for those who suffer from diabetes. 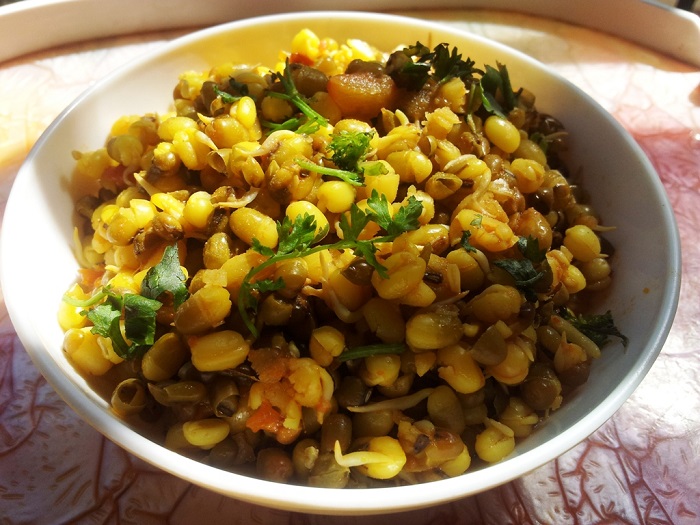 5. Rice
Rice is the staple diet of most Indians, who feel their meal is never complete without consuming a heap of rice, especially during the noon. A cup of rice offers a huge amount of carbohydrates, more than any other kind of food which is widely consumed in the country. 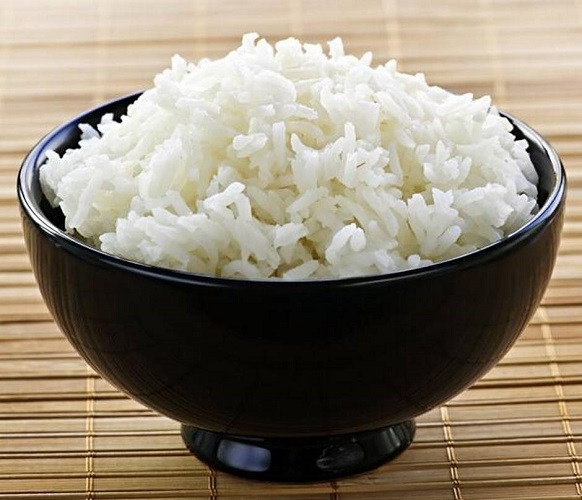 6. Paneer
Milk and its related products have been globally accepted as health foods that provide wholesome nourishment to the body. Cubed slices of Paneer is one such ingredient which offers a wide range of health benefits and has been often adopted by Indians in their diet. It is believed that consuming around hundred grams of this milk product would enrich the body with protein content worth 18 grams. 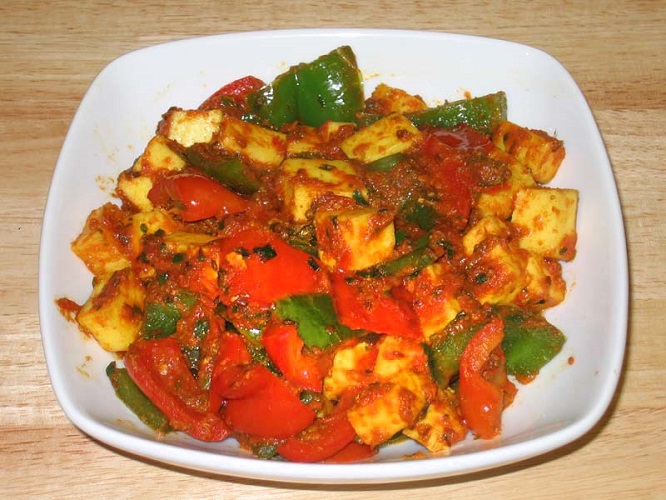 7. Idlis
This authentic south Indian delicacy is abundantly rich in carbohydrates and is low in calories, making it an absolute delight for people who are worried about gaining a few pounds. Idlis are also one of the few Indian foods which are easy to digest and considered to be a great option for a healthy breakfast. It is best to serve Idlis warm, along with chutney, prepared with a paste of grated coconut or even Sambhar, which is an Indian curry. 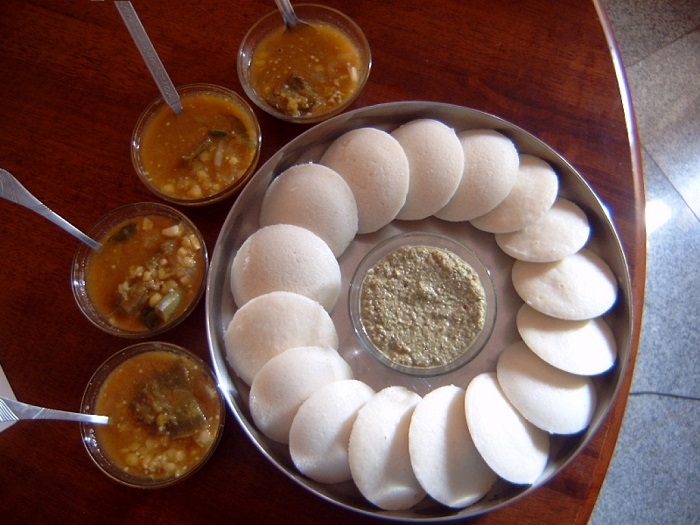 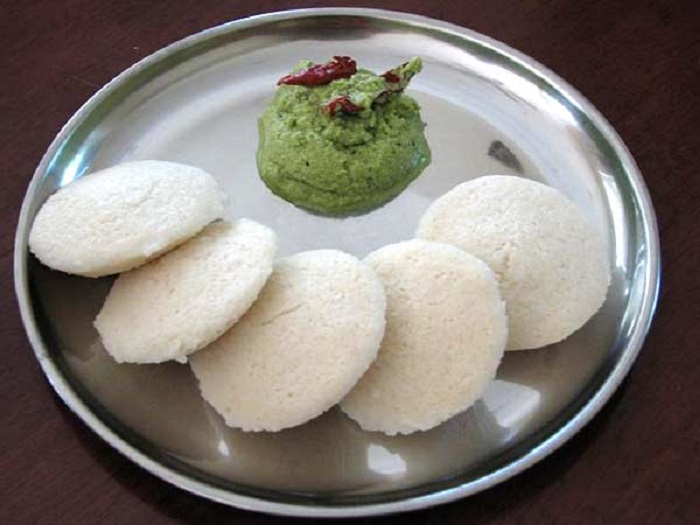 8. Rasam
An intermediate between a form of food and a beverage, the Rasam helps in preventing constipation and is great in keeping patients recovering from illnesses hydrated. Downing a glass of Rasam after a meal greatly helps in digestion and regularizes bowel movements. 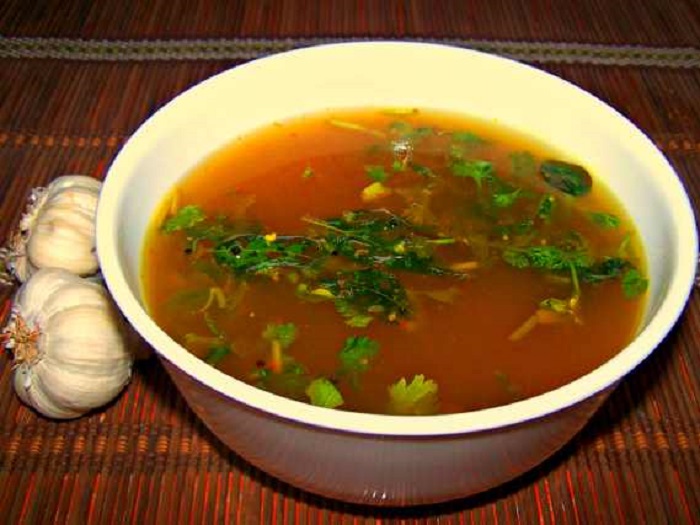 9. Vegetable curries
There are a plenty of ways to cook lip-smacking curries using vegetables. While vegetables such as lady’s finger curry tastes best when fried in a pan with little oil and served dry, a few others such as potatoes are suited to be presented in a gravy form. For people who strictly adhere to a vegetarian diet, curries made up of ingredients like soya bean nourish their body with a good amount of proteins.

10. Tandoori Chicken
Amongst the non-vegetarian delicacies, the famous Tandoori Chicken is considered one of the most delicious and healthy offerings of the Indian cuisine. Usually Chicken breasts, considered the most nutritious part of the bird, are used in preparing this delicacy. The food is really high on proteins and is particularly useful for those who want to gain muscle mass. 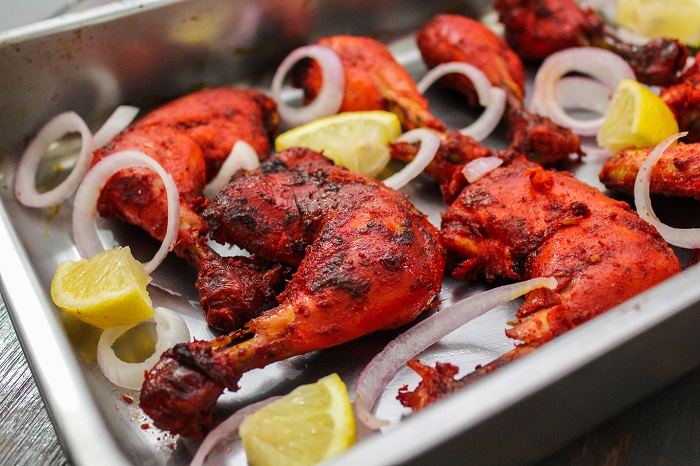 11. Ragi
Mostly consumed in the southern part of India, the highly nutritious Ragi flour is an under-rated form of food across the country. ‘Ragi Mudde’, a dish made by steaming the flour and served in form of balls, along with a curry, is a staple diet in many regions of Karnataka. Consuming the ‘Mudde’ makes one feel energetic throughout the day and its calcium content helps in strengthening the bones.

12. Hara Bhara Kabab
Many Indian restaurants offer this mouth-watering delight as a starter and many foodies feel they just can’t get enough of this vegetarian Kebab. The ingredients that go into the making of this kebab are spinach and potato, or even Paneer. These nutritious green fries make a great evening snack and is a great option to keep hunger at bay. 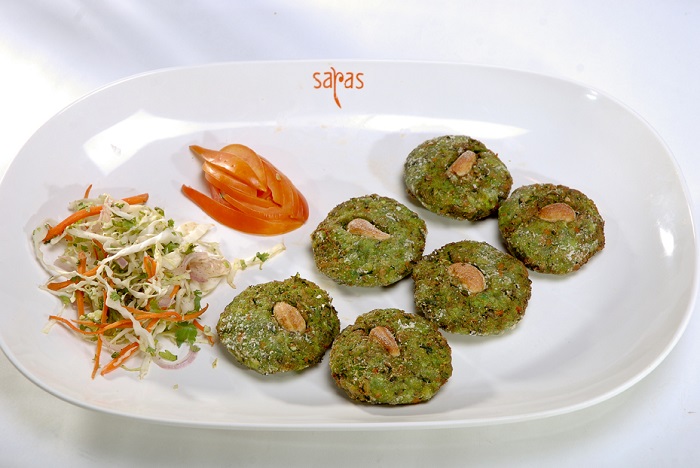 13. Raita
Curd, in itself acts as a great catalyst in the digestion process and Raita can be termed as ‘Curd With Benefits’. Different types of Raita are prepared by incorporating curd as the main ingredient. Cucumber Raita, fruit Raita- made of fruits and yoghurt, Spinach Raita and Onion Tomato Raita are the ones which are popular among the masses and also considered the most nutritious side-dishes. Raita served with flavored rice forms such as Biryani is a soothing treat to the senses. It works perfectly with a spicy main course. 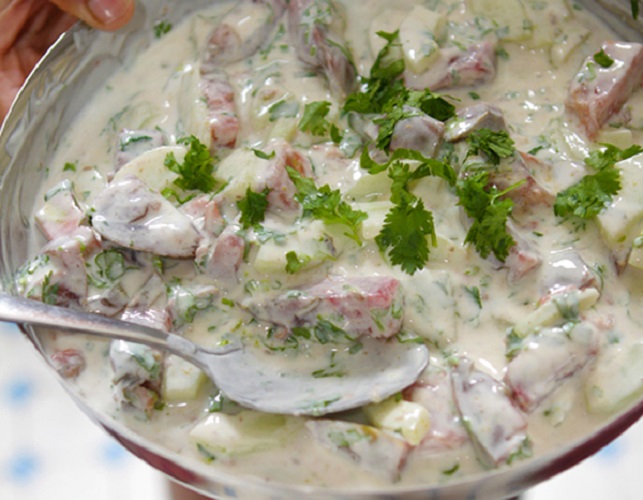 14. Chutney
Served in small amounts, the Chutney along with breads like Dosa, Parathas and even Idlis are very essential for a memorable eating experience. Consumption of Chutney prepared by using greens such as Pudina, Palak and Green Coriander help in gaining immunity against common cold and cough. Mango and Tamarind Chutneys help in fighting digestion problems and ailments like piles and diarrhea. 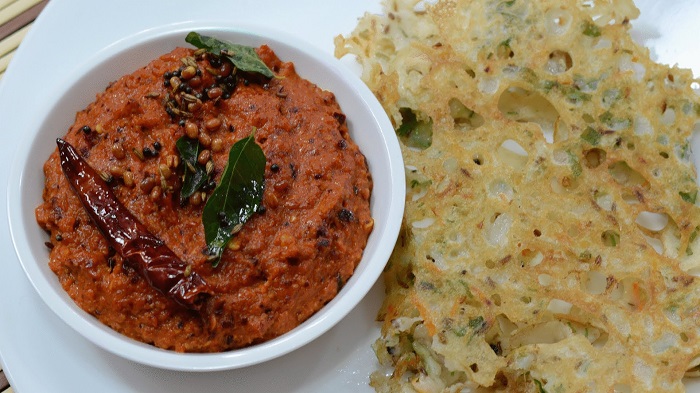 15. Dalia
Here is a nutritious yet low calorie dish which weight conscious people can cheer about. Prepared using broken wheat, the Dalia is high on fiber content which helps in toning the body against wear and tear. It is particularly useful for those who want to shed flab and refrain from a high-calorie diet. 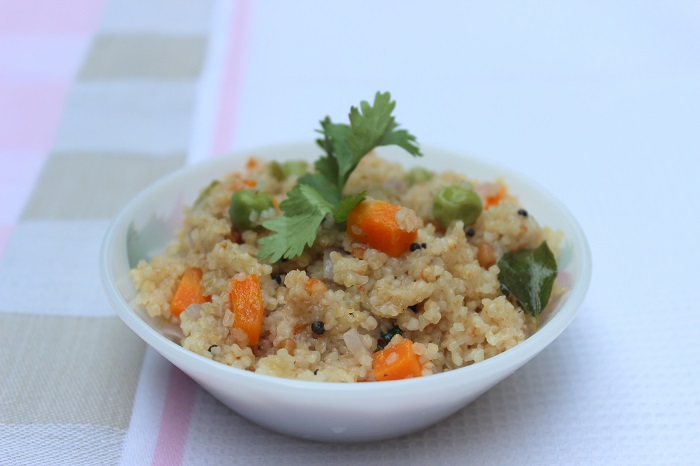