Amazing Benefits of Bamboo Shoots You Never Knew About

admin
on June 16, 2015 at 10:48 am
Nutrition Facts
Main Name: Bamboo Shoot
Biological Name: Bambusa vulgaris, Phyllostachys edulis
Names in other languages: Bambú  (Spanish), Bambou (French), Bambus (Czech), Baans (Hindi), Moongil Kuruthu (Tamil), Mulankoombu (Malayalam), Veduru chiguru (Telugu), Bansberankur (Bengali), Kalkipan (Marathi), Baunsagaja (Oriya), Baans (Urdu & Punjabi)
If you are looking for a healthy and low calorie option then bamboo shoots are definitely your answer! With numerous health benefits to boast of, bamboo is a tender, perennially green shoot which is also the fastest growing plants in the world. Bamboo shoots, or bamboo sprouts, are young stems that are harvested before they turn two weeks old and reach a height of 30 cm. Crispy and crunchy, bamboo shoots are valued for their delightfully supple texture and rich aroma. Native to Asia, bamboo shoots form an essential ingredient in the kitchens of China, India, Nepal, Indonesia, Vietnam, Philippines, Japan and Uganda. The edible bamboo shoots are of two varieties – winter and spring. Spring shoots are larger and tougher compared to the winter shoots, though both are available in fresh and canned forms. Snacks, curries, stir-fries, soups, salads and fried rice are just a few of the delicacies that make use of bamboo shoots. Besides, they contain a certain nutritive value. Read on to know more about these rich dietary supplements.
History
Members of the grass family, bamboo shoots were indigenous to southern China. They are the young and new canes of the bamboo plant, which is extremely versatile. Since ancient times, the woody tree trunks of bamboo have been used to build entire houses, furniture, kitchenware and utensils. Bamboo has also laid the foundation for many bridges and musical instruments, apart from the shoots being widely used as food. Due to its diverse adjustability to a wide range of climates, cultivation of bamboo shoots spread across different continents, from the tropical jungles of Chile to the mountain slopes of the Himalayas. But, owing to the weather conditions, bamboo shoots could not be cultivated in Canada, Europe, Antarctica and Western Asia, although successful efforts have been made in Northern Italy, which has mild winters and hot, humid summers. Today, bamboo shoots are commercially cultivated in Eastern and South Eastern Asia on extensive levels. 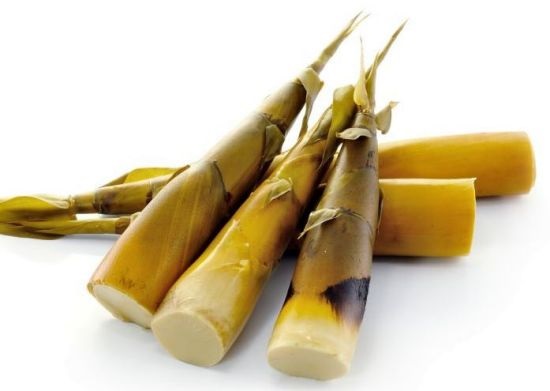 Bamboo Shoot Nutrition FactsAmount: 1 cup
Total Weight: 126 g
How many calories in bamboo shoots (per 100 gm)Bamboo shoots have about 12 calories per 100 gm of weight. 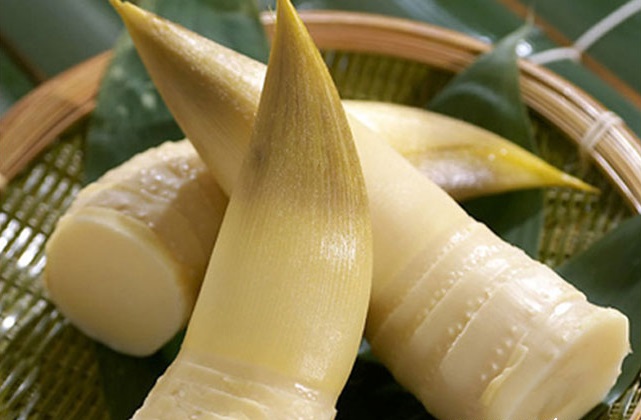 How to Buy Bamboo Shoots