20 Traditional North Indian Foods That Will Change Your Life Forever!

The land of India is characterized by its diversity; an amalgamation of different cultures, tradition and lifestyles is what truly defines India. Adding to the climate, vegetation and wildlife, the food in this country is equally diverse. The cuisine of each region is influenced by its history and climate, such that, every place in the country boasts of a unique delicacy. And Indians do love to talk about their food. How many times have you caught yourself lost in the thought of food while in a boring meeting? And what better place and time to share recipes than a kitty party? So many lifelong friendships are kindled over a cup of tea and a plate of hot and crunchy pakoras, and most importantly, what can be a better way to bond with your close ones over some mouth-flattering food? Without further ado let’s explore the rich and delectable dishes that North India has to offer.

1. Awadhi Biryani
Whether or not you are a rice lover, the aroma emanated from a plate of biryani is bound to stir the excitement of your taste buds. The infusion of spices and condiments combined with the long grained Basmati rice and the tenderly cooked meat (or vegetables), the Lucknawi or the Awadhi Biryani is a feast in itself. The royal dish is best served hot with a simple raita (curd). 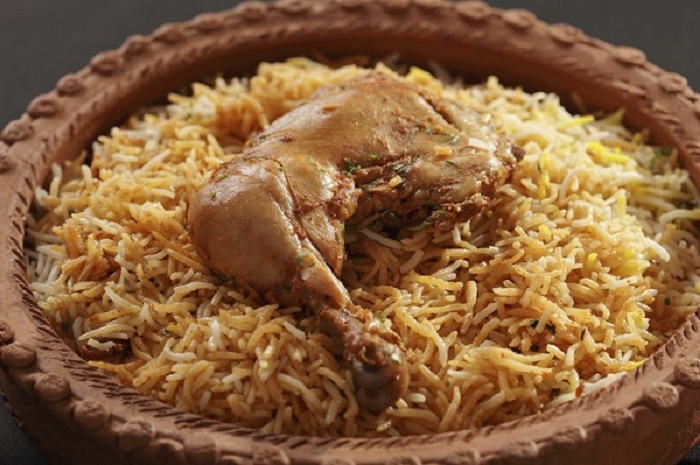 2. Chole Bhature
What better than the crispy fried Bhature and spicy gravy prepared with chick peas or Chole to satiate the pangs of hunger. Add to the gravy a dollop of butter and a dash of lemon juice and the simple dish is taken to a whole another level. Even a serving of pickle and onions go well with the scrumptious dish. Originating in the North-Western part of the country, Chole Bhature has evolved as a favorite of millions across the length and breadth of the country. 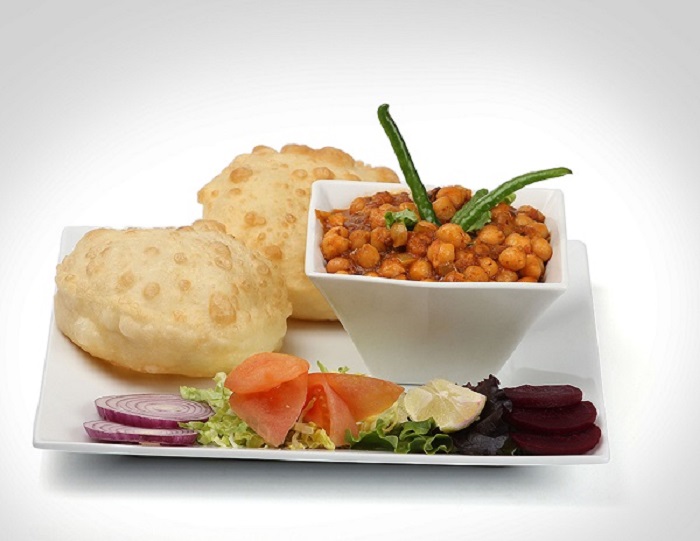 3. Naan/Rumali Roti
The Naan and the Rumali Roti have become an integral part of the Indian grub. While Rumali Roti is thin flat bread made with unleavened wheat flour dough, the dough for Naan,  is thick flat bread, comprises a mix of wheat flour and refined flour. A leavening agent is added to the dough and the Naan is cooked in an earthen oven or tandoor. Different stuffing or a generous helping of butter can also be used to give the plain Naan a soft moist texture, and it tastes best when eaten with spicy gravy. The Rumali roti is cooked on the convex side of the tava and should be served hot accompanied with gravy. 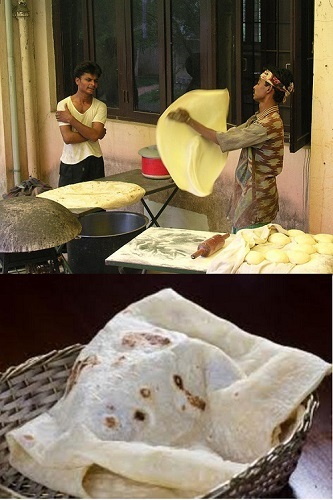 4. Chicken Butter Masala/Murg Makhani
What better than the spicy Chicken Butter Masala to devour along with Naan or Rumali Roti. The distinct flavor of fenugreek leaves or kasuri methi and the chicken cooked in butter till tender is the Holy Grail for any non-vegetarian. The gravy is prepared with fresh cream and the infusion of spices, especially the Kashmiri red chili powder which imparts a tantalizing color to the dish. One serving of this delectable dish is never enough to satisfy tingling taste buds and leaves you craving for more. 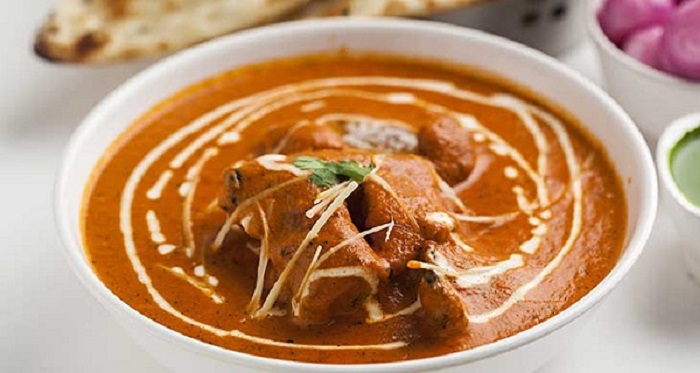 5. Litti Chokha
The simpering smokey litti, mashed potato and brinjal bharta is another delicacy from North India that will leave you craving for more. The stuffing made of sattu or powdered gram, chillies and achari masala is put inside balls, made using wheat flour dough, and sealed. Once baked, preferably on an earthen stove, the litti is served with chokha and chutney. Some like to savor their litti with a small helping of ghee. 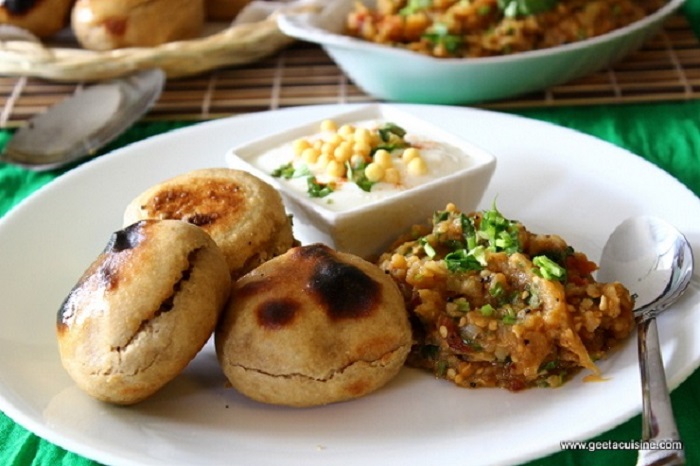 6. Baigan Bharta
This simple dish from North India can be relished with a helping of rice or roti and is a favorite especially during the chilly winters. The aubergine is basted with oil preferably mustard and then grilled over red-hot smoking charcoal or an earthen stove using coal or firewood. The smoky aura of the freshly roasted eggplant is an alluring sight and the bharta garnished with chilies and onions is sure to leave one mesmerized. 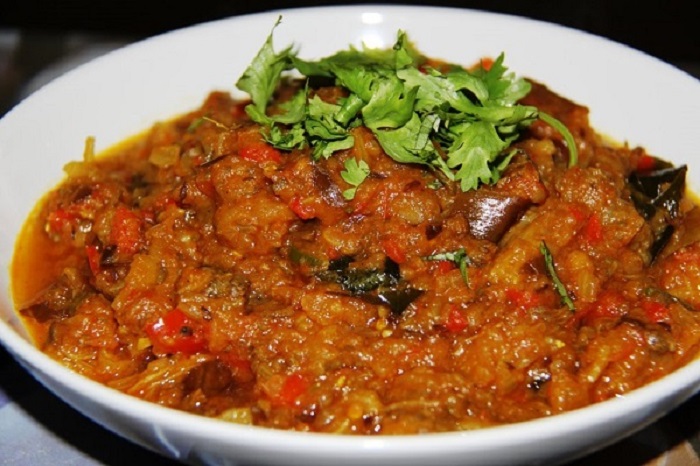 7. Kashmiri Dum Aloo
Though the Kashmiri cuisine is predominated by the use of meat, the Kashmiri Dum Aloo is a vegetarian delicacy from the mystic valley of Kashmir. The baby potatoes deep fried till golden brown are cooked in a concoction of spices that imparts a piquant flavor to the dish. The main ingredient used in this authentic dish is the powder of the dried Kashmiri chilies or chili peppers (degi mirch) but in another popular version the chili is done away with and replaced by a paste made out of cashew nuts or watermelon seeds (magaj). 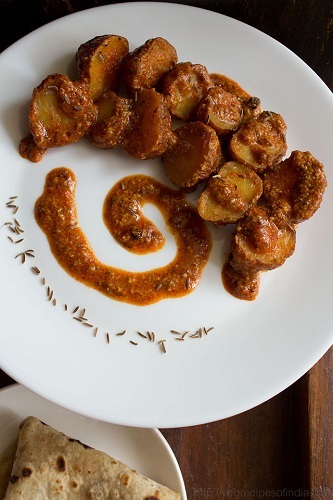 8. Tandoori Chicken/Tikka Masala
The tandoor, which is a cylindrical clay oven that is used for baking or cooking, first originated in the state of Punjab. Since its inception, several tandoori dishes have evolved and have found their way into the kitchens and invariably our hearts. One among the tandoori delicacy is the tandoori chicken which is a roasted chicken that is marinated in curd and basted with a mélange of spices including Cayenne pepper and red chili powder. The paneer tikka masala or chicken tikka masala is another grilled dish that has become a regular fare during festivities or family get-togethers. 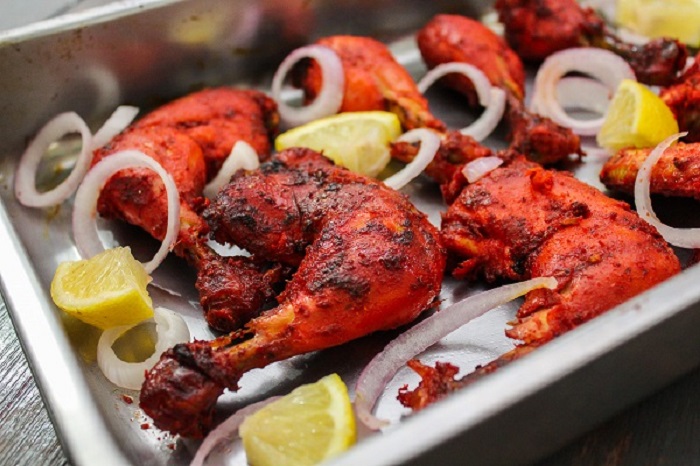 9. Parathe
Punjabi breakfast, lunch and dinner is incomplete without the sumptuous parathas. The thin flat bread is a healthy choice of meal and can be relished with pickle or curd. The most amazing thing about parathas is their stuffing which are aplenty. You have an array of stuffing to choose from, be it aloo, gobi, muli, onion, methi, paneer, or even chicken for those who love their non-veg. 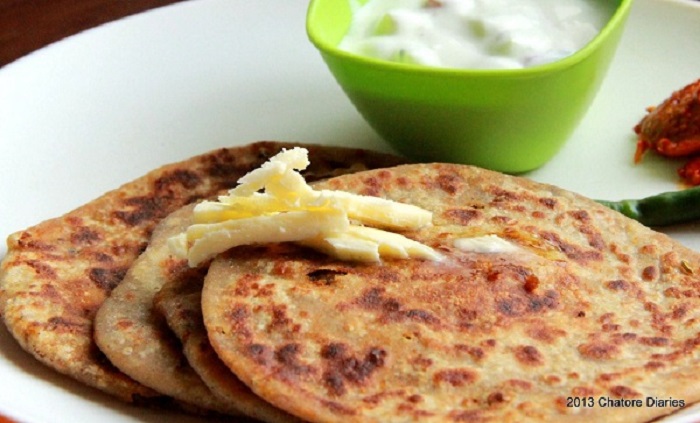 10. Rajma Chawal
What better than a piping hot plate of Rajma Chawal when you are in dire need of some comfort food? The iron and protein rich Rajma or red kidney beans accompanied with steamed rice or any Indian bread makes for a wholesome meal for the entire family. The Rajma, soaked overnight, is slow cooked in simmering gravy so that the beans soak in the conglomeration of masalas. A dollop of fresh cream added to the sauce transcends the dish to another level. 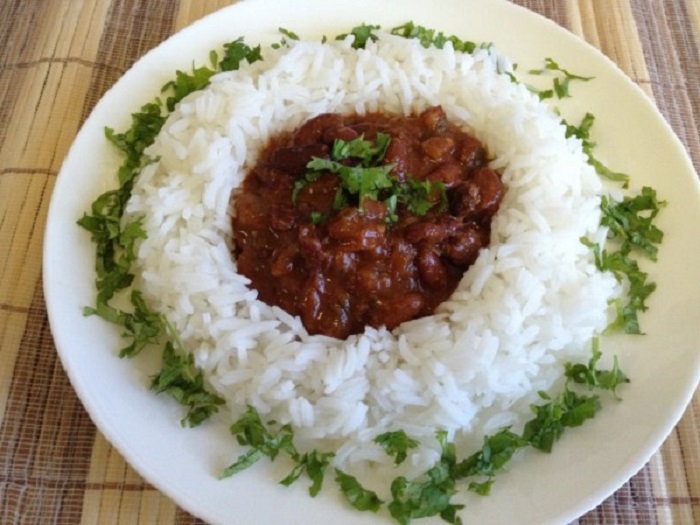 11. Papad Ki Sabji
The crispy Papad, be it roasted or fried, is capable of altering the taste of an entire meal. It can even be your savior at times when you’re going nuts over deciding the menu for the evening or need to concoct something quickly for the famished and fussy kids. The unassuming papad is given a delectable twist in this recipe and it can be served along with rice or roti. While some of the recipes suggest preparing the gravy with curd, you can opt not to use it for making the sabji. 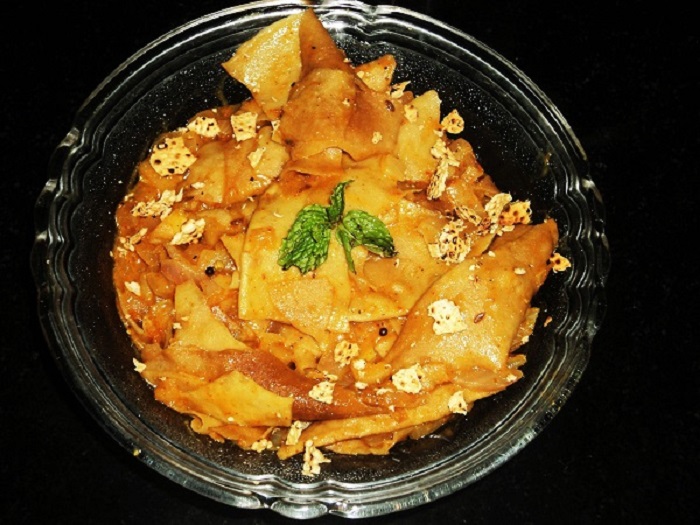 12. Sarso Da Saag/Makki Ki Roti
Sarso Da Saag and Makki Ki Roti is a dish which brings together all the flavors of Punjab on your platter. A combination made in the heaven, Makki ki roti is a flatbread made with corn flour dough and the Sarso Da Saag is a delicacy prepared with the tender stems of mustard leaves. The pungent aroma of mustard is balanced by the ginger, garlic and onion used in the concoction. The dish is best served hot and is usually accompanied with a piece of jaggery in its native Punjab. 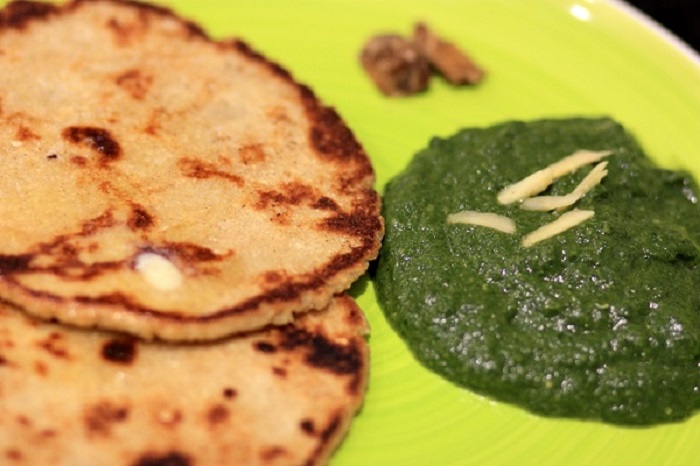 13. Rogan Josh/Laal Maans
For the ones who like to experiment with spicy food, the Rogan Josh, a staple of Kashmiri cuisine is a must try. Though known for its piquant taste, the first thing which hits you is the aroma of the blend of spices used to cook the lamb. The distinct color imparted by the Kashmiri Mirch, that is de-seeded to reduce the heat, makes for a mouth-watering sight imploring you to gorge on the delicacy. Another option for the spice lovers is the Rajasthani Laal Maans. Mutton laced with flavors of hot spices is cooked with a generous helping of curd to balance the sharpness of the chilies. 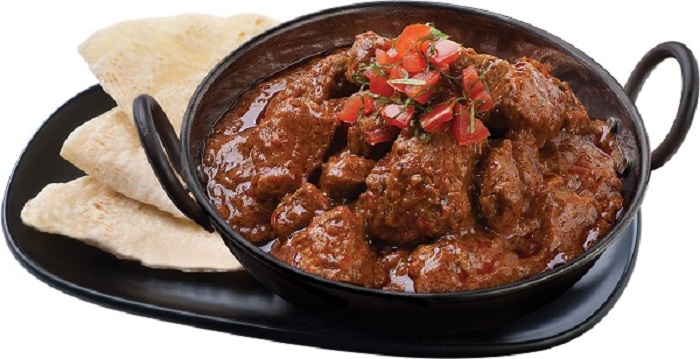 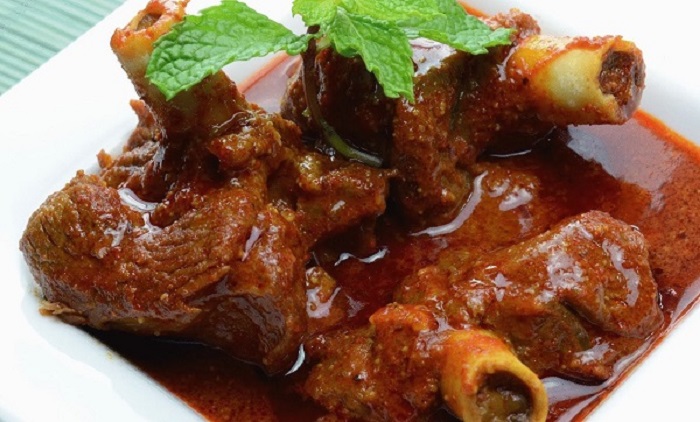 14. Dal Bati Churma
Dal Bati Churma is a typical dish of the land of desert, Rajasthan, and is a treat for your taste buds as well as your tummy. An assortment of pulses are used to prepare the Dal which is accompanied by the Bati, which is made up of wheat flour dough and baked in an earthen or brick stove using coal or firewood. The Churma which is a sweet dish, prepared with coarse whole wheat flour, and Rava deep in ghee with almonds and cashews used for garnishing, completes this wholesome and healthy meal. 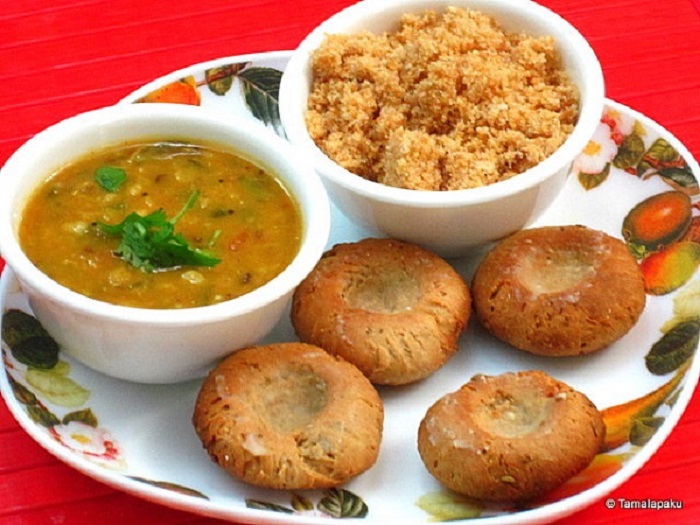 15. Dahi Vada
This North Indian delicacy has evolved as the favorite snack of many Indians and is especially a rage during the festivities. The deep fried vada is laced with a generous helping of curd and is topped with imli (tamarind) or dhaniya (coriander) chutney. A sprinkle of black salt or chaat masala adds to the tangy sweet taste of Dahi Vada. 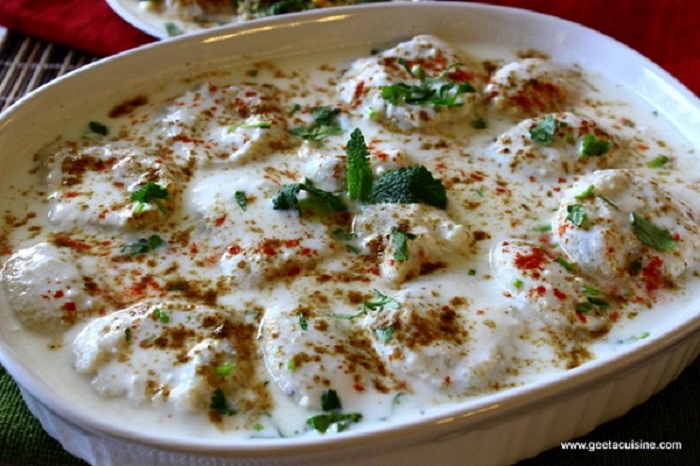 16. Kadhi
Though curd is used as an ingredient in many recipes and it even serves as an accompaniment to several dishes, this unassuming food item is given a delicious twist in the form of Kadhi. The curd mixed with gram flour is allowed to simmer, while the pinch of asafoetida is allowed to work its magic. Add a few pakoras or pieces of papad and the yummy kadhi is ready to be devoured. 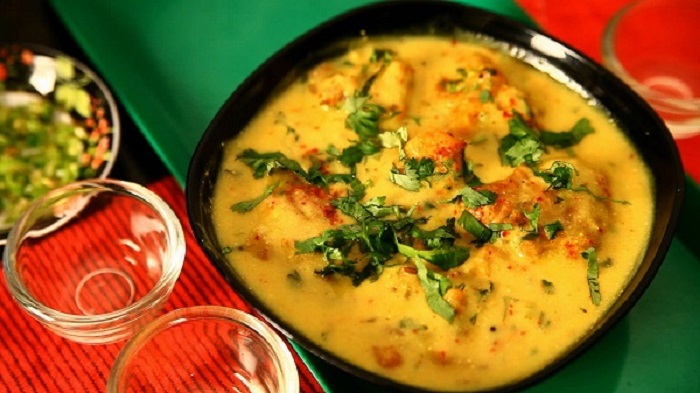 17. Rabri
Sweets are an integral part of the any cuisine and the rabri is one such delicacy of the north. The amazing dessert which found its origin in the holy city of Mathura is also easy to prepare unlike other sweets. The milk mixed with sugar is brought to boil on a low flame and the layers of cream formed are accumulated till the volume of milk reduces to one-third its original. Some people like to add a little kesar (saffron) that imparts a beautiful hue to the sweet dish. Almond slivers can also be used to garnish the rabri. 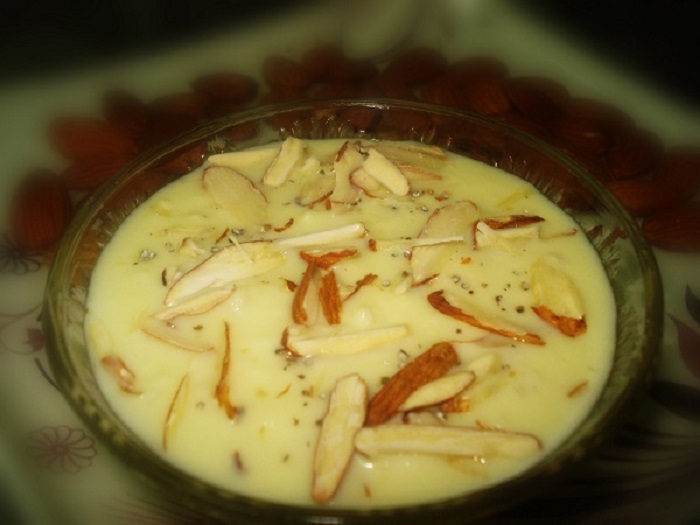 18. Aam Ka Murabba
The aam ka murabba is a traditional Indian savory prepared with raw mango and it can serve as an accompaniment with roti aur paratha. The grated or sliced mangoes mixed with sugar and cooked in low heat. Spices like cumin or aniseed (saunf) that are added to the mixture provide a distinctive essence to the dish and  even aid in digestion. 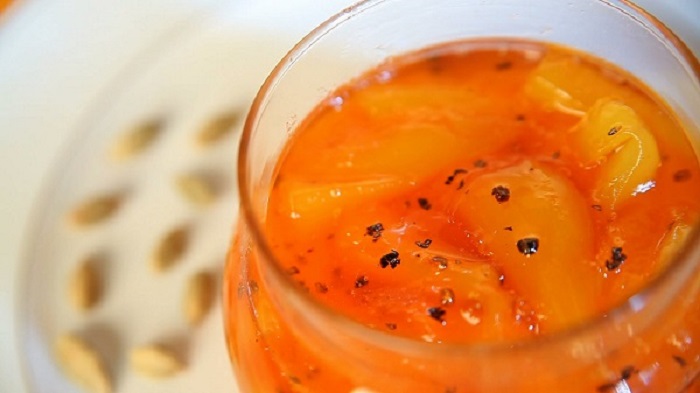 19. Ghewar
This delicacy from Rajasthan is a quite popular during the festivals of Teej, Makar Sankranti and Gangaur. The batter made using all-purpose flour is disgorged into a specially designed mould and then deep fried. The ghewar is then immersed into sugar syrup for a while and served hot with a topping of malai or mawa. The main ingredient which gives the dish its distinct flavor is the kewda essence, which is a plant extract. 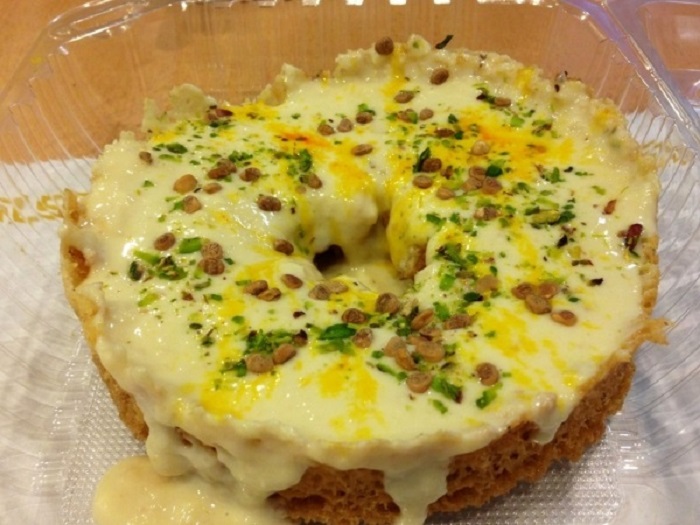 20. Lassi
This traditional refreshment originating in the land of five rivers provides relief from the scorching heat of summers and comes in various avatars. Yogurt blended with water and spices or different flavors results in a drink that is best enjoyed in a kulhad (glass made of clay). Choose from fruit flavored lassi or the traditional sweet or salty lassi and if you’re feeling brave enough then you can even try the Bhaang (Cannabis extract) Lassi.